In 1892 while serial killer Frederick Deeming was awaiting sentence for killing his wife, he claimed that his dead mother was taunting him at night in his cell in Melbourne Gaol.

He told visitors that it was she who had urged him to kill people. 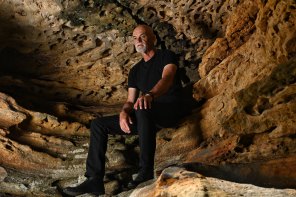 Trip to the underworld: Garry Linnell, author of The Devil’s Work, a book about serial killer Frederick Deeming.Credit:Nick Moir

Was Deeming insane? Or was it yet another shrewd trick pulled by the lifelong conman — who was thought by many to be Jack the Ripper — to try and avoid being hanged?

A new book about Deeming, The Devil’s Work, tells how, in Deeming’s day, even perfectly respectable members of society believed they could communicate with the dead.

Dickinson and his wife Marion, a palm reader, visited Deeming in prison to obtain a plaster cast of his hand, and later Marion told her husband that she, too, saw Deeming’s mother in the cell. 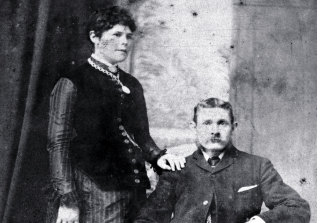 The discovery in March 1892, of the mutilated body of Deeming’s wife Emily — buried under a hearth in a house in the Melbourne suburb of Windsor — soon escalated into an international tragedy.

A journalist’s inquiries into Deeming’s past led to the discovery of the bodies of his first wife, Marie, and four children — the youngest 18 months old — under a floor that had been concreted by Deeming eight months before, at a house he had rented in Rainhill, near Liverpool, England. 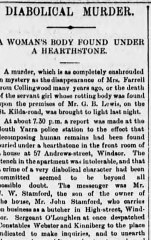 March 4, 1892: The Age reports a body was found in a house in the Melbourne suburb of Windsor.Credit:The Age archives

Deeming’s arrest came after detectives drinking at Melbourne’s Young and Jackson pub overheard a wine merchant talking about a strange man the merchant had met on a steamer on a trip to Perth. The stranger’s name was Baron Swanston – a known alias of Deeming.

Deeming was traced to the outback WA town of Southern Cross, 370km east of Perth, where he was waiting for his new fiancee, Kate Rounsefell, to arrive from Sydney. Deeming had purchased some concrete.

Deeming was extradited to Victoria, convicted of Emily’s murder and hanged at Melbourne Gaol on May 23, 1892.

Deeming was a globetrotter who could charm women, was known to visit brothels and to hate sex workers.

Deeming viciously stabbed his victims, however, unlike the Ripper, he buried them. After Deeming’s arrest, a dressmaker told London newspaper The Globe she recognised Deeming from a photo as the man who she courted in London’s East End in 1888, hours before, and the day after, two of the Ripper murders. 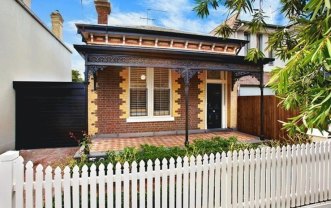 The house in Windsor where the body of Frederick Deeming’s second wife Emily was found in 1892.

She said the agitated man showed an intimate knowledge of the Ripper. He spoke of his travels abroad, and, like Deeming, wore ostentatious rings.

In the Melbourne Gaol, Deeming revelled in his notoriety and boasted that the world didn’t know what he’d gotten away with.

Linnell says Deeming “clearly had a disturbed mind” and was “one of the strangest individuals you could come across”, but was also street-smart.

Linnell says it’s curious that Deeming happened to run into the spectre of his dead mother when he was seeking to be spared execution on the grounds of insanity.

“I suspect, because of that street cunning he had, he looked around and thought, a lot of these people believe in ghosts and the afterlife, this may help me in my case and it might help me score an insanity plea,” Linnell said.

The Morning Edition newsletter is our guide to the day’s most important and interesting stories, analysis and insights. Sign up here. 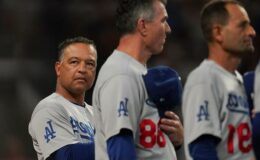