The New York City mother seen in a disturbing video being kicked down an escalator inside a subway station says the attack has left her looking like she was “clawed by a tiger,” a report says.

As of midday Tuesday, the unidentified suspect wanted for assaulting the 32-year-old last week at the Atlantic Ave-Barclays Center Station remains on the run, the New York Police Department tells Fox News. In an interview with the New York Daily News, the victim said the attack happened after the suspect pushed his way past her while going up the escalator.

“I said, ‘Say excuse me.’ Just those three words,” the victim told the newspaper. “And then I looked the other way. He aggressively responded, ‘I did say excuse me.’”

The victim reportedly said the man then turned around “and boom, he automatically kicked me in the chest. Oh my God, it was from the top of the escalator at Barclay Center all the way to the bottom.”

Surveillance footage released by police yesterday showed the woman tumbling down the escalator following the kick.

The woman suffered a sprained ankle but refused medical treatment at the scene, according to the Daily News.

“This was more than stairs. Escalators are spiky and moving. They’re bigger and sharp,” she said. “All over my body. I’m covered like I was clawed by a tiger.” 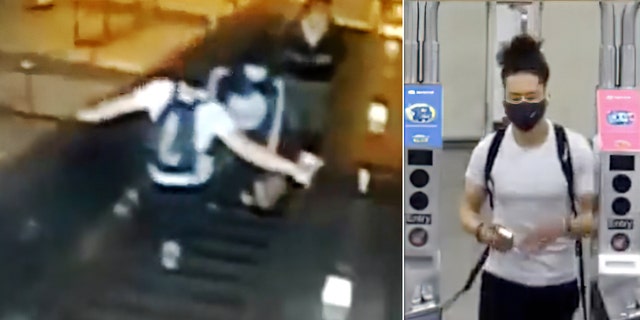 The suspect is seen kicking a woman on an escalator inside the Atlantic Ave-Barclays Center subway station in Brooklyn on Thursday. (NYPD)
(NYPD)

ELDERLY WOMAN ATTACKED IN NYC, FIGHTS BACK AS BIBLE GETS STOLEN

“I just didn’t want to sit in an emergency room. I just wanted to go home to my 9-year-old, my family,” she added. “I’ve been limping for days.”

The woman also told the Daily News that she did not know her attacker “and I hope I never see him again.”

The suspect was last seen leaving the station in Brooklyn in black pants and a white shirt.