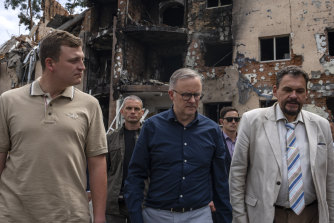 “Australia supports Ukraine and wants to see justice meted out for the crimes committed here,” Kuleba quoted Albanese as saying.

Reporters travelling with Albanese to Kyiv have been placed under a blackout for security reasons, but it has been confirmed that a small Australian delegation left Paris on Saturday evening AEST headed for Poland.

The Prime Minister’s office was unable to comment on the reports, but Albanese’s visit was also confirmed on Twitter by Ukraine’s Ministry of Defence.

The Telegram post said Albanese, in his first trip to Ukraine, was “shocked by what he saw”, including destroyed civilian houses, traces of mines, the destroyed Antonov airport. 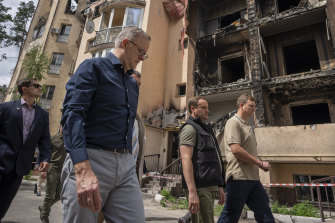 Irpin, with a population of about 70,000, and Bucha, a town of 37,000, were chosen by Russia as ideal targets to encircle the capital.Credit:AP

The airport in the city of Hostomel was one of Russia’s primary targets in the early stages of its invasion as capturing it would have allowed effective air raids on Kyiv.

Nearby Irpin, with a population of about 70,000, and Bucha, a town of 37,000 north-west of the capital, were chosen by Russia as ideal targets to encircle the capital and to be used as Russian military staging grounds.

The Ukrainian armed forces liberated both towns in April, after which photographic and video evidence of the massacre emerged of mass killings by Russian troops.

Photos showed corpses of civilians, lined up with their hands bound behind their backs, shot at point-blank range, which ostensibly gave proof that summary executions had taken place.

Kuleba said he was grateful to the Australian delegation for its personal visit to the Kyiv region.

“The war in Ukraine, in the centre of Europe, must remain on the world agenda,” he said.

Albanese is expected to hold discussions with Ukrainian President Volodymyr Zelensky, who personally invited him to visit in a letter last month which congratulated the prime minister on his election victory.

Australia has been the biggest non-NATO supporter of Ukraine in terms of military hardware and aid, with $285 million of weaponry so far and $65 million in humanitarian support.

Albanese acknowledged the decisions taken by the Morrison government in contributing to that figure in Paris on Thursday.

“I think this is something that Australians can be proud of,” he said. “We understand that the defence of Ukraine is about defending the rules-based international order and the implications for its disruption would have ramifications throughout the world.”

The United Nations estimates that 12 million people inside Ukraine will need relief and protection, while more than 4.2 million Ukrainian refugees may need protection and assistance in neighbouring countries in the coming months. Most of those fleeing Ukraine are women, girls and boys.

European leaders have stepped up their visits to Kyiv recently using a dedicated train service that carries them to the capital from Poland.

Get a note directly from our foreign correspondents on what’s making headlines around the world. Sign up for the weekly What in the World newsletter here.

Most Viewed in World