The Vampire Diaries fans were shocked to learn that Nina Dobrev, who played Elena Gilbert, was leaving before season 7. Like many other actors, Dobrev decided it was time to part ways with Elena. But, before she could do so, she shared the news of her departure on social media.

On April 6, 2015, Nina Dobrev posted that she was leaving The Vampire Diaries at the end of season 6 on her Instagram.

Dobrev wrote, “I’ve just spent the most beautiful weekend on Lake Lanier in Georgia with my own TVD Family, the cast and crew of The Vampire Diaries. I want to be the first to tell you that it wasn’t just a holiday celebration, it was a goodbye party. I always knew I wanted Elena’s story to be a six season adventure, and within those six years, I got the journey of a lifetime.”

She added, “I was a human, a vampire, a doppelganger, a crazy immortal, a doppelganger pretending to be human, a human pretending to be a doppelganger. I got kidnapped, killed, resurrected, tortured, cursed, body-snatched, was dead and undead, and there’s still so much more to come … Elena fell in love not once, but twice, with two epic soulmates, and I myself made some of the best friends I’ll ever know and built an extended family I will love forever.”

“There’s more to come before we wrap this up, and I promise you’ll get to hear all about my experiences … as we approach the season finale … but until then I invite you to hop on the roller coaster ride that is Elena Gilbert’s life and join me as I celebrate her and prepare to say goodbye to her — and to my work family — as I move on to the next chapter of my life. I want to share this goodbye with all of you.” 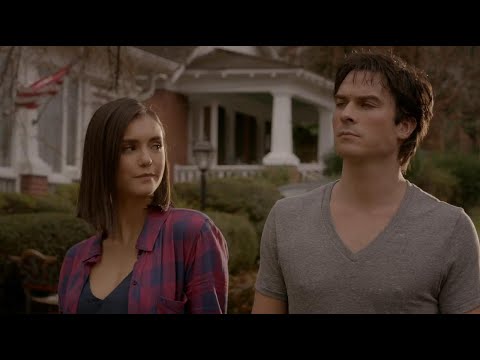 How the show wrote off Elena Gilbert

Since Nina Dobrev gave her two weeks’ notice to The Vampire Diaries, the writers were able to give her a worthy sendoff.

Kai cast a spell in the season 6 finale that linked Elena and Bonnie. As a result, Elena was rendered unconscious while Bonnie lived. The spell made it so that only one of them could be awake. So, Kai forced Damon to choose between his girlfriend and his best friend. And, in typical Damon fashion, he ripped off Kai’s head, but the spell remained.

Elena decided to let Bonnie live out her life, and she would awake once Bonnie had died. She bid her goodbyes, and that was the last fans saw of Elena until the series finale.

Nina Dobrev returned to play Elena and Katherine Pierce in the series finale of The Vampire Diaries. Bonnie broke their spell, and Elena woke up. She and Damon, who became human, lived out their lives together and married. After some time, Elena died and crossed over to the afterlife, where she reunited with her parents, Aunt Jenna, and Uncle John.

During an interview with SELF Magazine, Nina Dobrev discussed exiting The Vampire Diaries after six years. The actor revealed that she wasn’t scared to say goodbye, but it was bittersweet.

“I’ve loved working on this show,” Dobrev shared. “It’s been such a crazy, awesome adventure, and I’ve been surrounded by so many people who I consider family. I know this is a new exciting step in the right direction for me, but it’s going to be so strange not to be with them.”

She added, “It’s important for me that it be epic and powerful. I feel like I’m a completely different person than I was, and I’ve grown so much. It’s been a big part of my life, and I want it to be beautiful. I want it to end well.”

The Vampire Diaries, starring Nina Dobrev, is available to stream on Netflix.