“Come with us and slow down,” host Aaron Pedersen beckons in the opening moments of ABC’s new series Back to Nature. His voice plays over a montage showcasing Australia’s natural beauty: babbling brooks, lush rainforests, birdsong. Each image lingers; there are no fast cuts, no blink-and-you’ll-miss-it edits.

Much of the drawn-out opening features Pedersen and his co-host, author Holly Ringland, wordlessly strolling through Queensland’s Springbrook National Park. We follow from behind, a silent party in this group of three.

By the time they arrive at their destination – a misty waterfall – it takes every ounce of self-control not to leap through the screen and take Pedersen up on his offer. 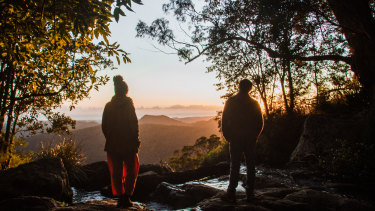 Holly Ringland and Aaron Pedersen in Back To Nature.

This is the magic of slow TV, able to transport viewers from wherever they’re watching and drop them into an alternative, and slower, universe.

Series producer Jane Manning says Back to Nature is “not slow TV, but it is gentle TV, bringing the pulse rate and cortisol levels down.” While that may be true, it’s a great deal slower than the fast-food TV diet we’ve been binging in 2021.

Sex/Life was a sugar rush that left us feeling unsatisfied and in need of a shower. The new whip-smart comedy Hacks demands the viewer keep up or be left behind. I’m still battling a stress ulcer from watching both the Mare of Easttown and The Underground Railroad finales. The Olympics, serving up a rush of adrenaline every day for two weeks, was exhilarating but exhausting.

So yes, anything slow – or even gentle – is a welcome break from the sprint we’ve been running.

Slow TV is not a new phenomenon, but it’s fast becoming more popular. The term was coined in 2009 when the Norwegian Broadcasting Corporation aired Bergensbanen: minutt for minutt, a seven-and-a-half hour broadcast of a train trip from Bergen to Oslo. This real-time marathon journey became a sleeper hit, attracting 1.2 million viewers in a country of about 5 million.

From there, the slow TV movement gathered steam, with global streaming platforms and broadcasters picking up on the trend. In the UK. the BBC launched BBC Four Goes Slow, while Netflix now has a whole category dedicated to slow TV. In Australia, SBS jumped on the slow-moving bandwagon first, broadcasting The Ghan in 2018.

The 3,000km trip from Adelaide to Darwin was condensed into three hours (an 18-hour version aired on Viceland) and proved popular with audiences, averaging 583,000 viewers in metro and regional areas. The success of The Ghan led to a slate of homemade slow programming; The Indian Pacific, The Kimberly Cruise and The Chocolate Factory.

“It’s very immersive; it allows you to take some time out, have your dinner around the TV as a family, and switch off,” says Mint Pictures’ Adam Kay, the director responsible for SBS’ slow shows.

“So much of what we watch these days leads you up the garden path, and if you can’t open the gate they show you how, and it’s just mind-numbing, but with slow TV, you’re never told what to think [or feel], there is rarely high octane music that provokes emotions, so it gets back to ground zero in terms of television making.”

Back to Nature draws from this playbook, featuring stunning cinematography but minimal bells and whistles. Across eight half-hour episodes, we find the occasional celebrity guest – Missy Higgins, John Williamson – but we’re there to get lost in the landscape. 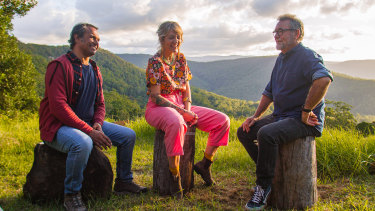 Aaron Pedersen and Holly Ringland with John Williamson in Back To Nature.

“Aaron and I are storytellers, and so we walk into landscapes together to experience them and then become conduits for everybody else to share that experience,” Ringland says. “Each episode gives the gift of relaxation, which slowly releases into you physically as you watch.”

Ironically, the Back to Nature crew had to move fast to ensure production wasn’t hampered by COVID-19 arriving in Australia last year.

“We started filming in March 2020, which was when COVID-19 first really hit our shores properly,” Ringland says. “So we were jumping between states, ducking border closures and lockdowns, but no matter how crazy the outside world felt, filming this show proved such a tonic.”

With much of Australia facing that same craziness right now, Ringland hopes that Back to Nature can be the slow, gentle salve we all need.

“It seems like uncanny timing with the state the country is currently in, but maybe we can transfer some of that soothing back to everyone at home.”

Find out the next TV, streaming series and movies to add to your must-sees. Get The Watchlist delivered every Thursday.

Most Viewed in Culture