While celebrating her 16th birthday at a gay bar in Puerto Rico a few years ago, Lina, a trans woman, said an older man drugged her and attempted to rape her. She then sought out the police to report her experience.

“When I turned to the police station, they said, ‘You were in a gay bar, what were you expecting?'” she said in an interview with CBS News. “And it’s stuff that may, to them, be so insignificant, but for us, it changes our life.”

She now works at Loverbar, an LGBTQ-friendly bar located near a busy area in San Juan. Now in her early 20s, Lina said it’s one of the rare places she feels safe as a trans person on the island.

“The instant that I go out, I feel scared, because I don’t know what some man can do to me,” Lina said. “What if the police sees me and attacks me?”

She is not alone. Activist groups and victims say transgender people are targets of violence from both Puerto Rican citizens and from local police for expressing their gender identity, and that police are often dismissive of crime victims who are transgender. Of the 44 transgender or gender non-conforming people who were fatally shot or killed by violent means in 2020 in the U.S., six were killed on the island, accounting for 14% of the deaths — more than any state or territory, according to tracking by the Human Rights Campaign.  At least one trans person was killed earlier this year, the organization said.

In addition to Lina, two nonbinary people told CBS News that their friends were also victimized.

Ínaru Nadia de la Fuente Díaz, who is part of La Sombrilla Cuir, an LGBT advocacy group, said that after a trans woman was stabbed in her apartment in Rio Piedras last October, she ran to police bleeding and naked. De la Fuente Díaz, who worked with the woman, said she was misgendered by police — adding that officers “didn’t do anything.”

“As trans and Black people too, we get invisibilized a lot in our communities,” de la Fuente Díaz said.

Dania Warhol, founder of a group dedicated to telling the stories of women, LGBTQ and Black and Brown people, said that while driving with friends one year around Christmas time in Trujillo Alto, just outside of San Juan, one of them said she was raped by police on a nearby road.

“One of the women who was with me, she was like, ‘Oh, you know, this is the route where police take us when they want to rape us,'” Warhol said, adding that the friend said she was also a victim.

Officials with Puerto Rico’s police force did not deny allegations of sexual assaults by officers.

When asked about whether officers have sexually assaulted trans people, Lieutenant Aimée Alvarado, director of the crimes against women and domestic violence unit at the Puerto Rico Police Department, told CBS News that “it could have happened.”

“Inside the police there are rotten apples, which we regret that there are, but that can happen,” she said in Spanish. “We are not perfect people. I’d love for my cops to be perfect. But we are not.”

Alvarado said police who conduct such crimes do not belong in the police department. But she also said she believes that there has been a “change of culture” within the force, and claimed any instances of rape likely happened years ago.

And while Alvarado acknowledged problems in the police force, she said “the numbers don’t tell us” that there is a widespread culture of violence against transgender people on the island.

Puerto Rico’s first-ever hate crime charges were filed last year by federal prosecutors in the case of two transgender women, Serena Angelique Velázquez Ramos, 32, and Layla Pelaez Sánchez, 21, who were allegedly burned to death by two men. On August 6, federal authorities charged three men with hate crimes for the 2020 assault of a transgender woman. Activists identified the victim as “Alexa” Negrón Luciano, a homeless trans woman who was found killed on a road in Toa Baja on February 24 of last year – the same day of the assault. But more than 18 months later, her murder is still under investigation, police said.

Many activists say there is a lack of overall cultural acceptance for trans individuals.

While Puerto Rico has the same federal protections for LGBTQ individuals as the rest of the U.S., support for the trans community on the local and state level isn’t there, activists say. Earlier this year, governor Pedro Pierluisi issued a state of emergency to prevent and protect women against sweeping gender violence amid a wave of femicides. After initial backlash from trans women for not specifically naming them in the order, Pierluisi clarified in a “Good Morning America” interview that they are part of the measure.

Marielle Nicole De León Toledo, who is also part of La Sombrilla Cuir, told CBS News that the island has not embraced trans people, including herself.

“You can tell that the culture here is still not ready to accept us…They pity us when we when we die, when we get murdered, and when violent things happen to us, but rarely, they’re there for us, when we need housing, we need medical help, we need all the essential services that everybody else in this island needs,” De León said.

Police officials say they have worked to combat prejudice within the force. After policy changes in 2019, officers received training on handling incidents involving transgender victims, including identifying them by the gender with which they identify. Sergeant Yvette Rivera, who oversees the unit of crimes against women and domestic violence, told CBS News that personnel, especially older ones and some of those with conservative religious beliefs, were resistant to follow through.

“They had to assimilate to terminology in the policies, which is breaking what they understood culturally,” Rivera said in Spanish. “The definitions went against what we learned as kids and what we’ve learned culturally of what is correct or not.”

To Rivera’s knowledge, there has not been a complaint from a trans person regarding misgendering — but she insisted that anyone with a complaint should come forward. 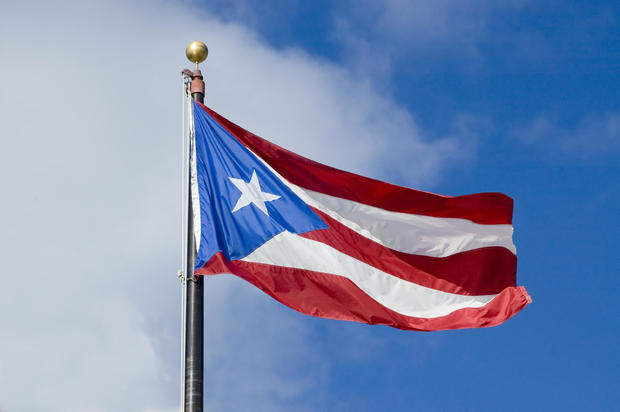 Across American states and territories, Puerto Rico was rated as “medium” by the Movement Advancement Project, a nonprofit think tank that issues ratings based on the number of laws and policies that promote equality for LGBTQ individuals. Trans Puerto Ricans can change their gender on driver’s licenses and birth certificates. However, Puerto Rico lacks laws explicitly protecting trans people from discrimination in housing, credit and lending and public accommodations, such as a restaurant denying bathroom service to a trans person on the basis of their gender identity, according to the project.

Though former Governor Ricardo Rossello issued an executive order in 2019 that requires institutions seeking a license to practice medicine to certify that they will not offer or perform conversion therapy, Puerto Rico’s legislature has not passed a full ban on the procedure, leaving the door open for a future governor to overturn the executive order. The debunked practice seeks to change a person’s sexual orientation and gender identity through psychological techniques.

Activists say discrimination is rampant, particularly against those who do not physically present as what is customarily expected with gender. Activists say many trans and non-binary people face limited job opportunities because of discrimination, prompting many into lower paying jobs and even prostitution, which is illegal in Puerto Rico.

That’s why for Lina, Loverbar is so special – it’s more than just work. It’s a “safe space for my identity to be free,” she said.

“It feels like you’re just there having a good time with friends and people, people that understand you, understand your troubles,” she said. “And sometimes you can be sad, you’re gonna be frustrated, but people will know. And they’re gonna hear you because the problems that you have, are very similar to them.”