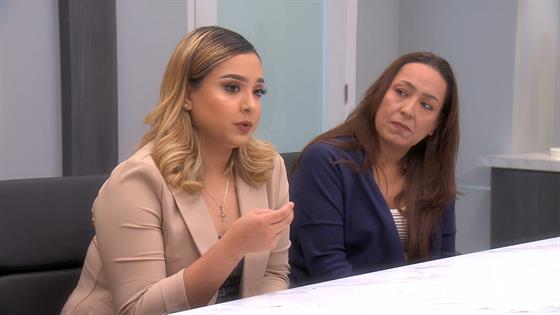 Another Botched for the books.

In tonight’s all-new episode, Drs. Terry Dubrow and Paul Nassif meet a patient who needs their help after a breast reduction gone wrong—and since they’ve definitely seen their fair share of bad boob surgeries, this should be a breeze, right?

In fact, Dr. Dubrow says that the new patient, Esmeralda, has “the worst complication from a breast reduction” that he’s ever seen.

During her consultation, she explains that she had the procedure done when she was 18 in an attempt to ease the back pain her DDD breasts were causing.

Dr. Nassif asks her when the nightmare began, and Esmeralda says shortly after the surgery when she started to smell something.

“The smell was coming through my shirt,” she tells the surgeons. “That’s when I started to panic.”

Esmeralda’s mother says yes, and that it looked like the tissue was dying.

She continues recounting her story, explaining that when she went back to visit her plastic surgeon, he said the problem could be fixed.

“For six months, I’d go to see him up to three times a week just so he could cut off the dead skin,” Esmeralda says, noting that during each visit, he’d cut deeper and deeper. “Until it turned [into] like flesh, like open flesh.”

Esmeralda tells Drs. Dubrow and Nassif that she wound up with one hole in each breast.

“He never sent you to a wound care center?” Dr. Dubrow asks her.

When Esmeralda says no, he’s even more bewildered by the situation.

“If you have tissue necrosis and tissue loss, and you need to treat it by surgical removal, you have to do it very aggressively and very quickly,” Dr. Dubrow says in a confessional. “Otherwise, if you’re behind the 8-ball, the last thing that breast is going to be shaped like, is a billiard ball.”

Watch the consultation in the above clip!

Watch a brand new episode of Botched Monday at 9 p.m., only on E!