Australia’s offshore processing of asylum seekers in Papua New Guinea will be terminated at the end of the year under an agreement between the two nations.

The arrangement has been in place since 2013 and at its peak 1353 asylum seekers were housed on Manus Island in 2014. 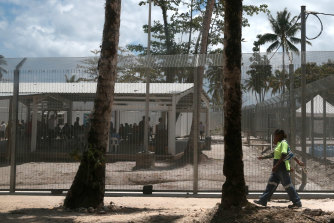 The Manus Island processing centres were closed in 2017.Credit:Andrew Meares

Home Affairs Minister Karen Andrews announced on Wednesday that processing in PNG will end on December 31.

Offshore processing in Nauru will continue under a new agreement signed with that country last month.

The offshore processing arrangement with PNG was signed by then prime minister Kevin Rudd in 2013 after 50,000 people arrived in Australia on more than 820 boats, with at least 1,200 dying at sea.

Ms Andrews said Australia’s border protection policies remained the same, with any asylum seekers attempting to enter Australia illegally by boat to be returned or sent to Nauru.

“Rather than chaos and tragedy, the Morrison government has restored integrity to Australia’s migration program and we’ve taken back control of our borders from the people smugglers. Today, we’re finalising an arrangement Labor entered into when they lost control,” she said.

“This government’s strong border protection policies – including a commitment to regional processing – have not changed. Anyone who attempts to enter Australia illegally by boat will be returned, or sent to Nauru.

“PNG and Nauru have been longstanding partners and regional leaders in the fight against maritime people smuggling. I thank them for their close cooperation and support.”

Ms Andrews has filmed a new message to potential illegal immigrants that will be sent out to countries in the region.

“Australia’s policy of sending illegal maritime arrivals to the country of Nauru has not changed. No one who arrives illegally by boat will ever settle or work in Australia,” she said in the video message.

“You will be caught, returned, or sent to Nauru. You have zero chance of success.”

Most Viewed in Politics