In the second edition of its Severe Weather in a Changing Climate report, released on Wednesday, IAG said Australia was already being affected by more extreme weather as the atmosphere warmed. New research indicates those impacts are likely to continue to increase. 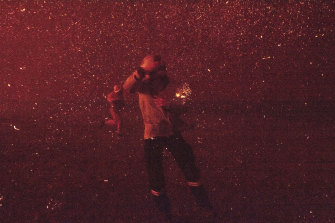 Bushfire risks are on the rise across almost all parts of Australia as the climate heats up, IAG says in a new report.Credit:Nick Moir

The report found bushfire weather risks will increase across almost all parts of Australia, with seasons lengthening and the windows for safely conducting so-called hazard-reduction fires narrowing.

"When the conditions get right, they get right big time," said Greg Holland, an emeritus senior scientist with the US National Centre for Atmospheric Research, which worked with IAG on the report.

The recent fire season demonstrated that building codes introduced after the 2009 Black Saturday bushfires in Victoria were inadequate for the most extreme days and will need to be tightened.

Mr Leplastrier said that since bushfire risk, much like floods, falls dramatically the further a home is from the peril, governments should consider intervening to halt residents moving into high-threat spots.

"There's not a mechanism to actually to stop or prohibit building like there is in flood," he said. "Those are some of the tougher decisions we’re going to have to make as a broader approach." 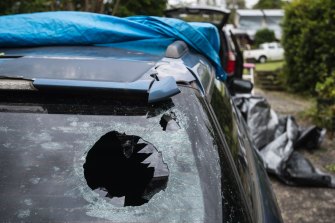 Many homes and vehicles in Berowra Heights sustained damage when a hailstorm hit the area in December 2018. Studies show hailstones are getting bigger.Credit:Wolter Peeters

Another peril on the rise is hailstorms, with research showing events with hailstones up to 5 centimetres in diameter or larger have increased in frequency in south-eastern Australia.

Areas facing increased risk include Sydney, Adelaide, Perth, Canberra and Melbourne, but also inland areas such as the Hunter Valley and central and eastern Victoria, the report found.

East coast lows, several of which have battered NSW, are also changing in ways that are likely to increase their impacts on coastal regions.

Dr Holland said that while the overall frequency of such lows may be trending lower, for the more dangerous ones that draw in large amounts of tropical moisture there has been a "substantial increase". 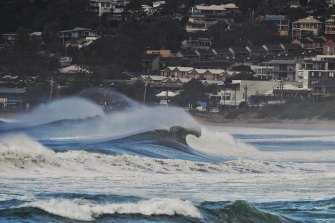 Heavy surf stirred up by an east coast low off the NSW coast in July 2020. The more damaging type of such events is on the increase in a warming world, IAG says.Credit:Nick Moir

Not only is there more rain to dump, winds are stronger, damaging properties but also whipping up the bigger surf that increases beach erosion.

For NSW, the hotspots are Bega on the South Coast, the Hawkesbury-Nepean valley and the Hunter region, where there is both the uplift of air and a funnelling effect from the geography.

"These are the areas that are the most prone to get significant damage," Dr Holland said. 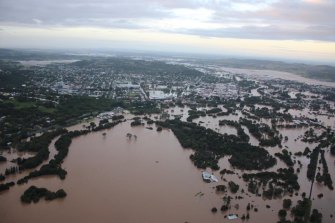 Aerial photos of Lismore showing flooding from the aftermath of Cyclone Debbie in March 2017. Cyclones are tracking further south and the share of major ones is on the rise. Credit:Rotorwing Helicopter Services

With the atmosphere holding 7 per cent more moisture for each degree of warming, other big weather events such as cyclones or floods are also trending towards more extremes and are projected to continue to do so.

Across the world, the share of cyclones with a category 4 or 5 strength have increased from about a one-in-10 proportion in pre-industrial times to about one in every four or five now, a ratio also observed off Australia's north-east coast, the report said.

Rainfall dumped offshore from cyclones has been rising but overland the pace of increase is two to three times, Dr Holland said.

Likewise, massive flooding events that might have happened once in 1000 years in areas such as the Murray Darling Basin may become once in a century events, catching planners and residents off-guard.

“We are getting to the point where we are going to experience things that we didn’t know existed," Dr Holland said.

Our weekly newsletter will deliver expert analysis of the race to the White House from our US correspondent Matthew Knott. Sign up for The Sydney Morning Herald‘s newsletter here, The Age‘s here, Brisbane Times‘ here and WAtoday‘s here.

Most Viewed in Environment