Audiences will have their temperature checked and be asked to mask up as Sydney's mainstage theatre makes a welcome comeback five months after COVID-19 forced it to shut its doors.

Belvoir St Theatre is to mount a five-week season of A Room of One's Own, an adaptation of Virginia Woolf's landmark feminist essay, from September 16, becoming the first of Sydney's major theatre companies to announce an imminent return to the stage. 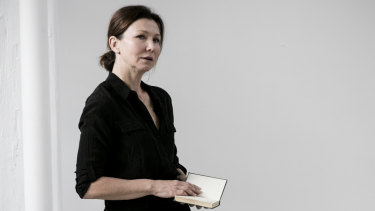 Actress Anita Hegh in rehearsal for A Room of One’s Own at Belvoir.Credit:Brett Boardman

Sydney Theatre Company is also reviewing possibilities for the resumption of its truncated season.

"We are still working through what is possible with the government's current four square metre rule and hope to have more to say about our plans for the remainder of our 2020 season soon," the company's executive director Patrick McIntyre said.

Kirribilli's Ensemble Theatre is as yet unable to commit to a timeframe for its stage return.

Belvoir's first stage foray in five months will set the template for theatre offerings and audience experience for the foreseeable future.

To observe the minimum four square square rule of social distancing, A Room of One's Own will play to nightly audiences of 120 people in a theatre with the capacity to seat 338. Patrons will be temperature tested on entry and asked to mask up, seated in chequerboard fashion with seats lying empty between a maximum of two occupied seats.

During an open dress rehearsal intended to act as a test run, actor Anita Hegh said she had been pleasantly surprised by how full the theatre appeared to be.

"For a moment it was a little bit like waking up from an operation, lights in your eyes, people with masks on, it felt a bit surreal for a second but then it was as normal as anything," she said. "There were people who said to me, 'I haven't been in the theatre for five months' – they were so appreciative. It was a joyous experience."

The two-hand play was considered ideal for these COVID-19 times. Hegh and fellow actor Ella Prince are separated by a wall of glass on stage while Woolf's passionate expository on gender politics is suited to the more intimate atmosphere.

With the theatre one-third full, Belvoir's executive director Sue Donnelly said the production company was "going to lose money but we thought we had to try it because we don't want a world without theatre, without live performance, so we need to adapt".

Subscribers have priority with a waitlist on tickets for public sale. Donnelly has modelled different scenarios in the event social distancing is tightened or relaxed, or Sydney is shut down again.

As a precaution, Hegh has taken her 11-month-old daughter out of daycare. "If I get a sniffle or a cold I have to get a COVID test. Then you are waiting for the test results and that's going to have an impact on performance times. I cannot afford to get sick so I have to be very careful."

With four shows from the 2020 season cancelled – Dance Nation, Escaped Alone, The Jungle and the Sea and Summerfolk – it's a relief for Belvoir's artistic director Eamon Flack that the company is back on stage.

"It's the longest six months I've ever lived through," he said. "There definitely have been moments when I've had to fight against despair because you feel maybe like things will fall apart before we ever get to get back up.