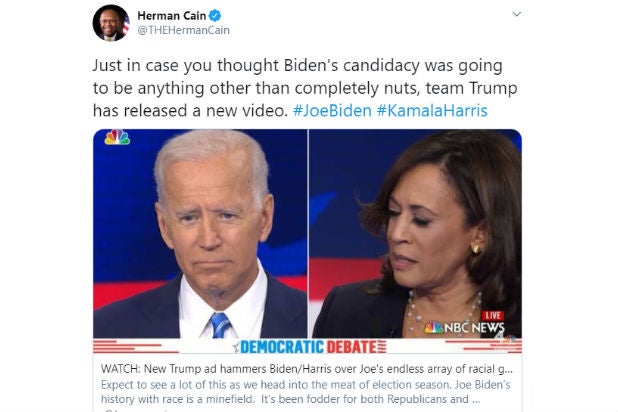 People don’t like to speak ill of the recently deceased, but that courtesy didn’t extend to the deceased’s estate on Wednesday after the Twitter account that belonged to Herman Cain shared a link to an article attacking Joe Biden and Kamala Harris — two weeks after the businessman and Republican politician’s unfortunate death.

Wednesday afternoon, the account tweeted “Just in case you thought Biden’s candidacy was going to be anything other than completely nuts, team Trump has released a new video. #JoeBiden #KamalaHarris,” with a link to a Donald Trump campaign video attempting to suggest Joe Biden is a racist. A Republican criticizing the Democratic presidential ticket isn’t particularly unusual of course, but the tweet was written as though it was by the owner of the Twitter account.

Of course, it wasn’t Cain who tweeted the article, as he died July 30 after a month-long battle with COVID-19. It isn’t known where he contracted the illness, which has killed more than 160,000 Americans in less than 5 months, making the U.S. the world’s worst-impacted country by far. But experts say it can take up to two weeks before symptoms present, and 11 days before he tested positive Cain, a major Trump supporter, attended the divisive rally held in Tulsa, Oklahoma on July 20. On the day of he was photographed inside the event without wearing a mask.

Hermain Cain’s family said in a statement on Aug. 11 that to honor of Cain’s dying wish, they would continue to use his platform to advocate for the issues he cared about. The statement, which you can read here, explained that they would do so with a rotating roster of contributors under the banner “The Cain Gang.” The statement did not say they would continue to operate Cain’s Twitter account without acknowledgment or changes to the account, however.

As of this writing, Cain’s account still bears his name and bio unchanged, with no mention of the “Cain Gang” or acknowledgement of his death. Here’s an image: 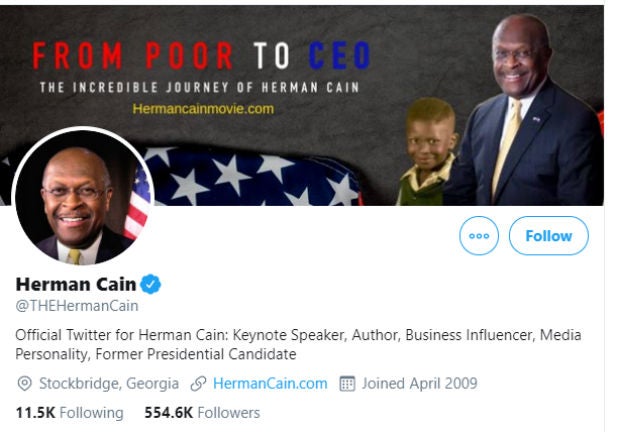 Unsurprisingly, thousands of Twitter users criticized or mocked the people who now operate Cain’s account, both for the tweet itself and also in light of the possible circumstances that led to his death.

“If you think this is tasteless. Wait till you see the marionette they made so he could give an RNC speech,” one user said.

“Herman Cain is literally dead because he went to a Trump rally. Whoever’s in charge of this account should stop tweeting and read a book for the first time in their life,” said another.

“People were mostly careful and respectful when Herman Cain passed away from COVID-19, and boy that is going to disappear quickly now that his family and comms team have decided to keep tweeting out new political content under his name,” said another.

“Isn’t it a violation of Twitter’s rules to impersonate actual people? At a minimum, the blue check should be revoked. Herman Cain is dead and it is unclear who is pretending to be him when they post with this account,” another said.

Other users made frequent mention of Cain’s actual status, using memes referring to such pop culture as “Weekend at Bernies” to express contempt for the use of Cain’s account in this manner. See the tweet from Herman Cain’s account, and a sampling of replies to the tweet, below. See a screen-capture of the tweet at the top of the page, in case it is later deleted.