The White House says the Biden family dogs, Major and Champ, are temporarily back in Delaware while the first lady is traveling amid a report that the dogs were sent there following an aggressive incident.

“With the first lady traveling for three days, Champ and Major went to Delaware to stay with family friends,” Michael LaRosa, the first lady’s spokesman, told USA TODAY in an email.

“What I can tell you as a dog lover – I know you are – is that Major and Champ are part of the Biden family,” Psaki said. “They’re members of the family. They often go to Delaware when the first lady is traveling, and they’re adjusting to their new home. I don’t have any more on those reports, I just know they’re beloved members of the family and of course the White House family too.”

The first lady delivered remarks Monday at the State Department’s virtual International Women of Courage Awards ceremony before she hopped on a plane to spend Tuesday and Wednesday visiting U.S. military installations in Washington state and California. 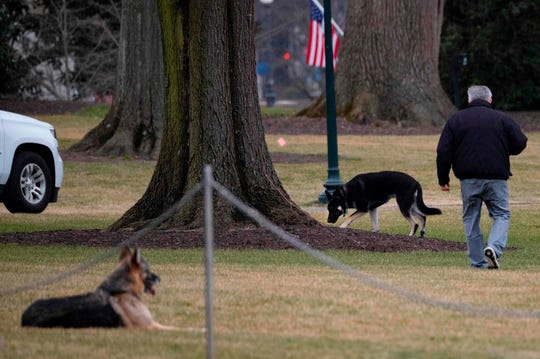 First dogs Champ and Major Biden on the South Lawn of the White House on Jan. 25, 2021. The pooches were seen trotting on the grounds with first lady Jill Biden. (Photo: JIM WATSON, AFP via Getty Images)

Major and Champ moved in to the White House a few days after inauguration, returning to the decades-long held tradition of presidential pets following President Donald Trump’s dog-less administration.

First lady Jill Biden’s office posted pictures at the time of the two pups frolicking on the South Lawn. “Champ and Major have joined us in the White House!” said the tweet adorned with red hearts and paw prints.

“Champ is enjoying his new dog bed by the fireplace and Major loved running around on the South Lawn,” reported LaRosa in an email to USA TODAY.

12-year-old Champ joined the family in 2008. The Bidens adopted Major two years ago after fostering him from a litter of six other German shepherd puppies, who were given “life-saving medical care” after exposure to “something toxic in their home,” a Delaware Humane Association news release said at the time of adoption in 2018.

“We are so happy to welcome Major to the Biden family, and we are grateful to the Delaware Humane Association for their work in finding forever homes for Major and countless other animals,” Biden told CNN in 2018. (Biden has owned at least three other German Shepherds and had a Great Dane named Governor.)