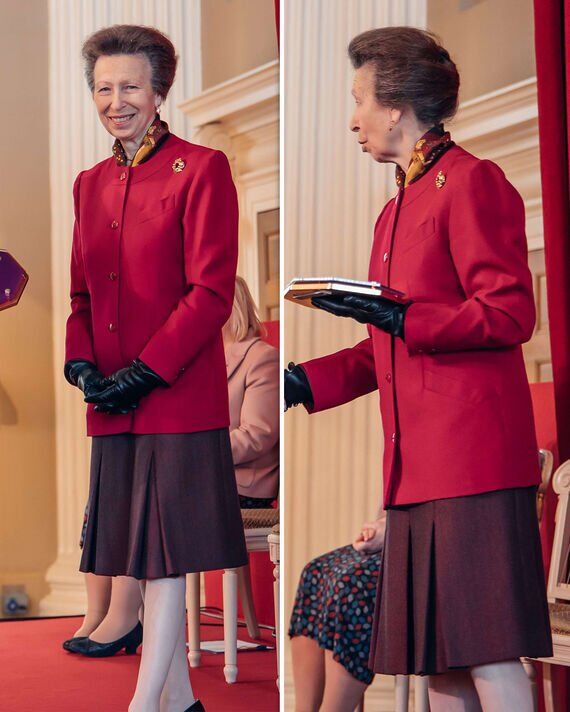 As City and Guilds’ president, Princess Anne presented 46 UK organisations with their Princess Royal Training Awards during a special ceremony at Banqueting House, London, on Tuesday, December 6. The awards recognised the organisations’ outstanding commitment to workplace training and development.

Anne looked elegant at the ceremony in a simple but stylish outfit of jacket and skirt.

This is one of her favourite combinations, but, unlike previous occasion, Anne wore nude tights with her outfit, instead of black ones.

These are a royal staple as female members of the Royal Family rarely go anywhere without any tights, if they are wearing a skirt or a dress.

This is because, according to royal experts, one of Queen Elizabeth’s most major fashion rules for female members of the Royal Family was to wear tights with dresses and skirts.

Hemlines were also usually recommended to be knee-length, like Anne’s skirt.

Fashion expert Stephen Sheldon previously told Express.co.uk: “Royal women are supposed to have a modest decorum when it comes to their legs, from having to wear tights in all weathers to a rule of thumb that skirts and dresses are no shorter than four inches above the knee.”

Royal expert Victoria Arbiter told Insider in 2018: “You never see a royal without their nude stockings.”

Anne’s jacket on Tuesday was a bright red and collarless. It featured buttons that ran down its centre and a pocket on its chest.

She paired this with a brown pleated skirt that reached her knees and a pair of black court shoes.

The Princess Royal completed the look with a pair of black leather gloves and an orange, patterned silk scarf, which she had laid just underneath the neckline of her jacket.

Her hair was in its usual updo and she wore minimal make-up.

As for jewellery, Anne donned her favourite gold pair, which are dangling, diamond-shaped jewels.

But what stood out the most was a ruby and gold brooch on her jacket’s lapel.

The ruby gemstone was at the brooch’s centre, matching Anne’s jacket, and surrounded by gold.

Anne is a fan of brooches and often wears them, but she has rarely been seen in this ruby jewel.

Royal fans were quick to praise Anne for her attendance at the ceremony on Tuesday, taking to social media to express their opinions.

Marilynn Tobash wrote: “The red jacket really suited Anne. She looks fabulous, red must be her colour and she should wear it more often. She’s a hard-working royal with a brutal schedule yet she always looks cool and collected.”

Renisha Thareja agreed, saying: “Princess Anne looks terrific today, that outfit and colour really suit her. And really impressed with Anne as usual, she has such an amazing worth ethic, which is something I adore.”

Jeanne added: “Princess Anne is another of the ones that is royal in her heart. Love her she’s truly a Queen.”